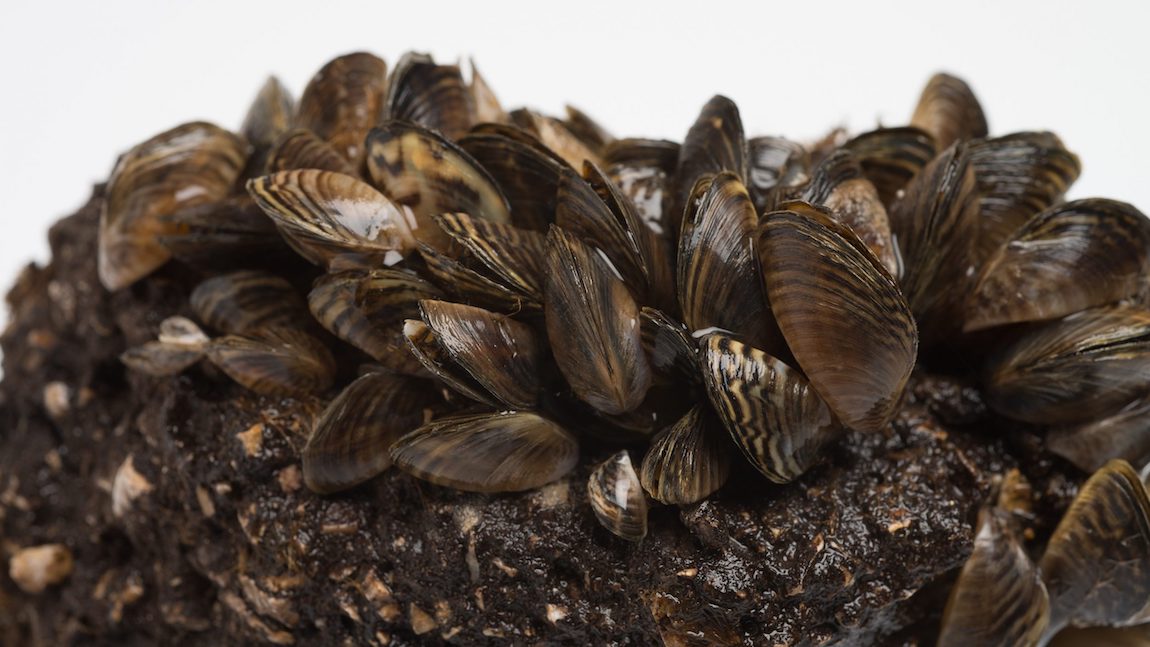 In the pantheon of invasive species, zebra mussels (and their cousin, the quagga mussel) have a place of honor–or maybe infamy is a better word. Since first being discovered in the Great Lakes area in 1988, the tiny bivalves have spread throughout the entire watershed. They take food (plankton) from native species, increase toxic blue-green algae levels, clog water intake structures on buildings and boats, and can even kill native clams and mussels by encrusting them. What about eating them, like some places in the Caribbean do with invasive lionfish? This sounds like a great idea—mussels are delicious! Unfortunately, there are several reasons why this isn’t practical. First, zebra mussels are about as big as your fingernail. There just isn’t much there to eat. Second, since they’re filter feeders, if the water they’re in has any pollutants, you’d end up ingesting those as well. Third, the sheer number of zebra mussels makes the task daunting. Some estimates put the number of zebra mussels in the Great Lakes (and inland lakes in the area) at 750 million.

Too small, potentially toxic, too many. If we can’t eat our way out of this mess, what solution is there? There are a lot of potential remedies that are being tried.

There’s the Dock Disk, a $40 device made of flexible foam discs about the size of a dinner plate. The disks have an alloy of copper and zinc that emits ions that the mussels don’t like. A pesticide called Zequanox uses a type of bacteria to poison the mussels. Some companies are making paint that can be used underwater that has copper, chemicals, or even chili oil to try to prevent the mussels from attaching to their surfaces.

In the end, prevention really is the best remedy. In other words, don’t transport water that could be infested from one system to another. Ballast water from a transcontinental ship from western Russia is probably how the mussels got here in the first place, and physically preventing them from moving to new water systems is the best way we can keep them from spreading further. Cleaning anything that has been in the water before leaving the area means that you’re less likely to take any microscopic stowaways home with you. Also, zebra mussels can’t live out of the water for too long, so if you let everything dry for at least five days, it’s safe.