Dr. Marc O’Griofa has led an amazing life. Originally from Ireland, he’s been around the world not once but twice. He’s been cave diving and diving with sharks, even cage diving with Great Whites off the southern coast of Australia. He’s gone skydiving over an extinct volcano in Hawaii. But for all his adventures, what’s his most memorable adventure?

Living and working on the Aquarius Habitat. He says that nothing will ever top that. What’s it like to do that? There are some similarities to the world topside, but a lot of differences. 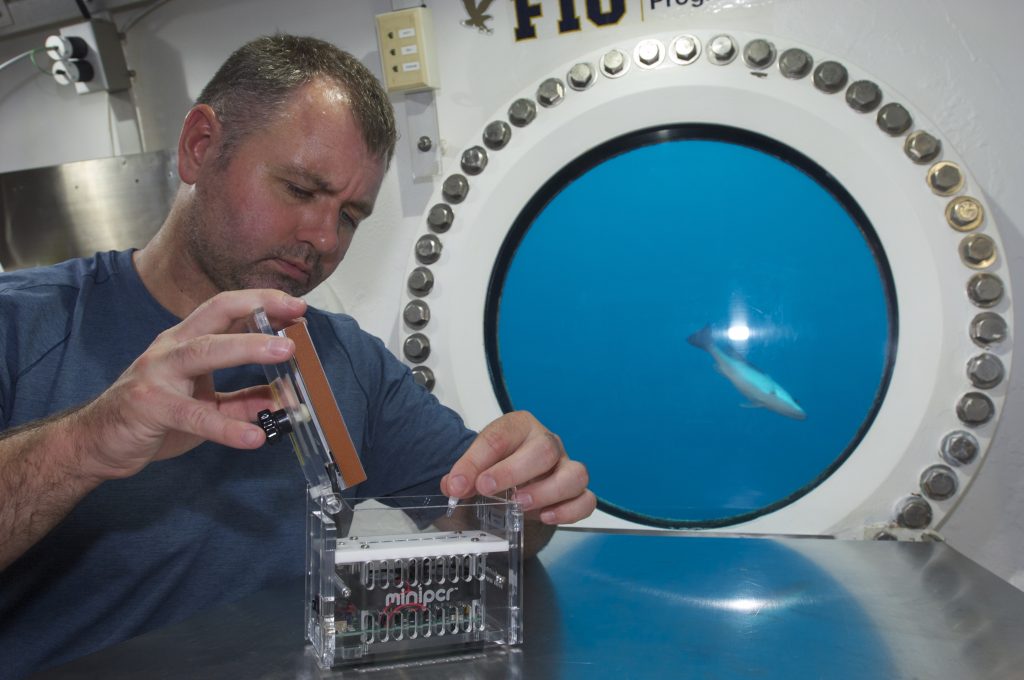 First, how long does it take to get down to Aquarius? Although the distance from the water’s surface to Aquarius never changes, the trip there and back isn’t always the same. If you’re just going in for a “hop & pop,” a trip lasting less than an hour, each way takes 10 or 15 minutes (it’s possible to go faster, but that’s hard on your body, especially your ears). But if you’re an Aquanaut spending two weeks in the Hab, the trip down might be fast, but getting ready to go back up to the surface takes 18 hours of depressurization. The entire Hab essentially turns into a hyperbaric chamber so everyone can readjust to the lower pressure back at the surface.

Getting dressed to go to the office is more involved when your “office” is a coral reef 65 feet underwater. In addition to the standard wetsuit, aquanauts also wear dive booties to protect their feet, a weight belt, and a specially made stainless steel diving helmet with a camera and communication devices built in. Safety checks are crucial, both before leaving the Hab and again once everyone is out in the water, and they take at least 15 minutes.

Days on the Hab are beyond busy. Everyone generally wakes up between 5:30 and 6AM. You get half an hour for meals, unless you’re so busy with an experiment that you don’t have time to eat. After a full day of work, everyone crashes into their bunks around 10:30 or 11PM. Well . . . not everyone. Not always. Dr. O’Griofa says that at night, the area outside the Hab becomes a different universe. That’s when the predators become more active; lately, in fact, bull sharks have been roaming the waters around the Hab. Whether the outer lights are on or natural bioluminescence is providing the light, it’s quite a show—one worth staying up late for.

Of course, things don’t always go smoothly. Dr. O’Griofa’s first scientific experiment on the Hab was to run through a DNA sequencing procedure. The procedure itself was 40 pages long, and the experiment was scheduled to take eight hours. About halfway through, after meticulously following each step, he got a call from Mission Control with an odd question: had he turned the gene sequencer on? He looked at the back of the machine and saw a power switch—still in the off position. At that point, the work that he had done was useless. There wasn’t enough time that day to start over, either. He felt bad, even though he hadn’t done anything wrong, but something valuable was learned from that situation. The procedure hadn’t specified that he needed to turn the sequencer on. NASA’s procedures are very rigorous and must be followed to the letter, so discovering the missing step and fixing the procedure before it went up to the ISS was a tremendous benefit.

What did Dr. O’Griofa miss the most while he was in the Hab? Fresh food. The Hab can’t have a stove or refrigerator, so the Aquanauts live mostly on camp food, which gets monotonous very quickly. Once, the top side team took pity on them, and sent down a pizza in large zip-top bags. It was the best thing they ate all week. But now that the situation is reversed, what does Dr. O’Griofa miss most about being at Aquarius? His team. He says that his crew was the most amazing group of people, and the camaraderie they shared was incredible. Yes, they keep in touch. That kind of bond never fades.

If you’re interested in asking Dr. O’Griofa any questions of your own, be sure to submit them before our next livestream (look at the sidebar on the left side of the screen for the submission form), and he’ll get to as many of them as he can!